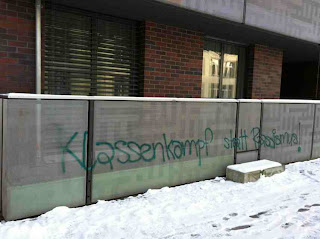 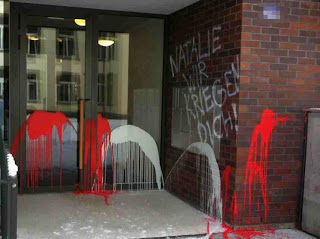 ATS, December 27, 2010 - Unknown persons threw pots of paint against the homes of several members of the Right-wing populist, National conservative UDC (Union Démocratique du Centre) Winterthur Region (ZH) on the night of Sunday to Monday. The National Councillors Natalie Rickli and Jürg Stahl are among the victims.

Slogans such as "Natalie we'll get you"or "Class struggle in place of racism" were also sprayed. Contacted by the ATS, Ms. Stahl and Mr. Rickli confirmed information. "These people obviously do not understand anything about democracy," said Stahl.
Posted by sysiphus at 13:28