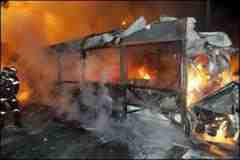 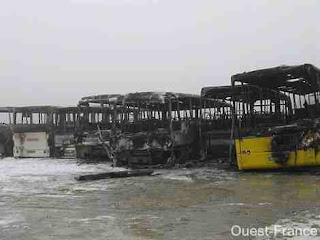 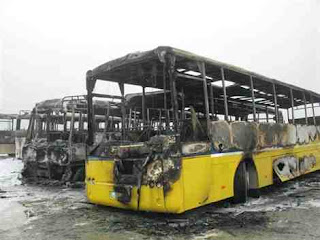 Ouest France, 22 December 2010 - Fire broke out in the night of Monday to Tuesday in the area of Briords that serves as a depot open to school buses. The origin of the fire is criminal. A motorist alerted the fire brigade around 4 am Tuesday morning. She was on her way to work and saw flames not far from the road. Firefighters of Carquefou, whose barracks are located a few hundred meters away, arrived immediately. Of the twenty school buses parked in the area, eight were on fire. Five belonging to the Querard company and three to the Brodu society.
A fire expert commissioned by the prosecutor visited the site yesterday and found evidence of a crime. According to initial findings, the fire was lit inside one of the vehicles in the centre, then spread to other vehicles, all parked next to each other. Why was this act committed? The question remains, and the investigation promises to be long, the fire destroyed fingerprints and any traces. There were no witnesses and no surveillance cameras on the parking. No gas can was found on site, the hypothesis of a theft of fuel which went wrong is not privileged.*
Posted by sysiphus at 13:39