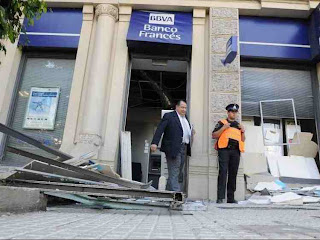 
AFP 21 December 2010 - The explosion of the homemade device occurred around daybreak at an automatic teller machine of Banco Frances, breaking windows and damaging the entrance of the bank branch, police said.

Officials were using bomb-sniffing dogs at the scene of the explosion, and said that so far no one has claimed responsibility.

Authorities said the upscale neighbourhood where the blast occurred is home to numerous embassies.

Another bomb exploded before dawn on Monday outside a bank in downtown Santiago, the capital of neighbouring Chile, breaking windows but causing no injuries.

Police were investigating who may have placed the Santiago bomb, as well as another that damaged a police funeral parlour early on Monday.

About 100 small blasts have been set off across Chile in the last five years, many claimed by anarchist groups.