London, 9 December - Thousands fight against exclusion and the death society in iconoclastic revelry 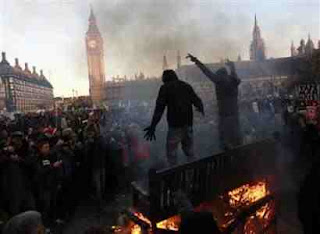 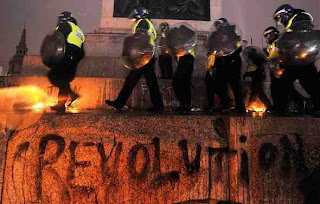 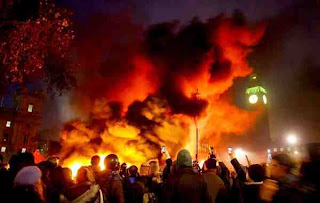 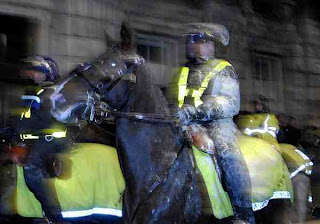 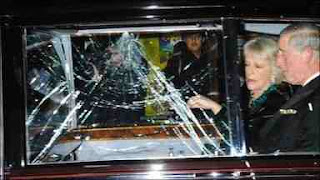 London 9 December, 2010 - Thousands of young and not so young pour uncontrollably like mercury into Parliament Square to make themselves seen and heard. No fetishisation of the cops - they are simply ignored or got out of the way with the means at hand. Barriers intended to fence people in like sheep become a part of the improvised weaponry, thrown back from whence they came amidst music and laughter. 'We kettled the cops, heh, heh, heh'. At one point a posse of mounted riot cops gallop into the crowd - there is no panic, and without fear to stimulate their adrenaline, they ride straight out of the compound.
Meanwhile, impervious to the people's solicitations, the democratic dictatorship - worthy servants of capital's restructuring - press ahead in their contribution to the division of the world into included and excluded.
As the young people's anticipation turns to rage, some of the symbols of greed and power (dead and alive) that infest everybodies' lives are derided, brought down to size, simply, from the heart, far from the calculated deadly violence of police who step in, one of them almost murdering a demonstrator, smashing his skull with a truncheon.
Now, days later, it is the job of the lackeys of the regime to vomit out the latter's essence, VIOLENCE, in a twisted condemnatory accusation against the people whose lives are at stake now and in the future to come.
Perhaps a broken window in a high street store revealed the institutional violence of the sweatshops of Bangladesh that supply their trashy goods under the whip of starvation wages?
Perhaps paint on a riot cop's shield sparked the will to live, i.e. rebel, i.e. exercise one's physical and mental force in one's own interests, regardless of the threat of the blind institutionalised violence of the State?
Perhaps shouts of 'Off with their heads!' and the terror on the faces of the occupants of the cracked, paint-bespattered royal hearse jolted us out of the Disneyland of everyday 'life', giving a glimpse of a new/old wonderland, where vague historical images encounter vibrant hitherto undreamed dreams?
The Treasury, the supreme court?
No fortress is impregnable, the structures around us that affect our lives and rule the planet continue to exist thanks to consensus, ignorance or indifference, all conditions that are undergoing a radical upturning.
The detox has begun, we are flushing the State out of our veins!
So, in the words of an Angry Punk, found in a leaflet some time ago in the streets of London, SMASH YOUR TV, PISS ON YOUR NEWSPAPER, FIND THE PEOPLE THAT SHARE THE SAME HATRED AGAINST THIS SOCIETY AND ACT DIRECTLY AGAINST THE TARGETS!