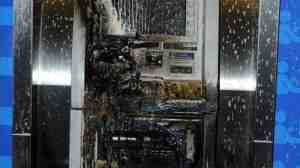 In the German city of Berlin people burned three atm in solidarity for anarchist prisoners in Greece.
An autonomous group claims to be responsible for three arsons against atm money machines in districts of Berlin. This happend 30/11/2010 in Kreuzberg, Friedrichshain and Neukoelln, areas with lot of trouble.
The message says:“We have in the night to 30 November ATMs in Friedrichshain, Kreuzberg and Neukölln pass to the flame.
We express our solidarity with the hostages of the Greek State. The names of those prisoners in Greece are in our hearts are endless!
For freedom!
For the revolt!
Groups of the flaming heart”
Posted by sysiphus at 13:14