Rome and many other cities, Italy - Riots and clashes in day of action against Gelmini reform and vote of confidence in Berlusconi 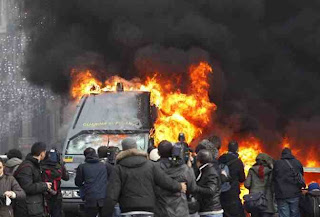 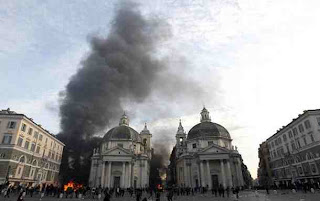 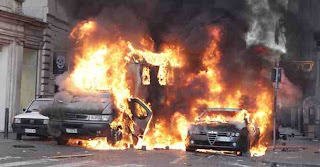 from the italian media

14 December 2010 - Thousands of college students demonstrated today in Rome and major cities in a day of action against the Gelmini reform and in support of the no-confidence vote against Berlusconi. Among them, however, are also added to the social centres and militant black bloc. And after the confidence in the House, the violence broke out.
Black Bloc activists and militants from the social centres, who had joined the student marches in the morning, reached corso Rinascimento, a step away from the Senate, presided over by the police. Against the police cars paper bombs, firecrackers, cobblestones, bottles and eggs rained down. There were riots and fights in different areas of the centre between Via del Corso and Piazza del Popolo, with charges of tear gas in response to improvised barricades with trash bins on fire, road blocks, broken windows, and assaults on armoured forces of law and order with sticks and hammers. A dozen young men with their faces covered raided the offices of civil defense in via Ulpiano smashing windows and throwing eggs, no injuries among employees. The wounded in the street however were at least 40. Among them a journalist of the Agi, hit in the face by a stone.
At Porta del Popolo police charged protesters engaged in heavy stone-throwing, to back them off to the Tiber. The bulk of the procession is split: one part is directed at the Flaminio district, the other Prati. A difficult day today for the Capital. In the streets, on the day in Parliament voted confidence in the Berlusconi government, university and high school students, along with temporary workers, workers, researchers, Aquila earthquake survivors and activists from struggles for housing and social welfare gathered under the name "united against the crisis."
Posted by sysiphus at 08:07