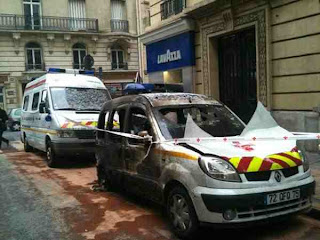 cette semaine
Indy Nantes, Thursday, December 2, 2010 - "On the night of December 1 to 2, 2 Red Cross vehicles went up in flames in Desgoffe street in the 6th arrondissement of Paris. Wanting it to be believed that they "help" people, the Red Cross is present in several detention camps for foreigners and refugees, and several centres for the homeless. But the Red Cross confines the poor in their misery: the humanitarian security of the State and capital.
Solidarity with the rebels and those who escaped from the detention centre in Vincennes."
Posted by sysiphus at 13:25