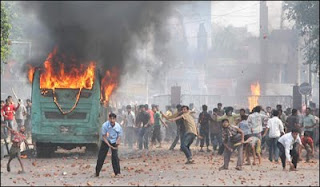 signalfire
Clashes between readymade garment workers demonstrating against a decrease in pay after implementation of the new wage board and law enforcers in Chittagong, Dhaka and Narayanganj on Sunday left four persons dead and at least 185 injured, including 50 policemen.
During the clashes, police fired around 600 rounds of rubber bullet, lobbed 150 teargas canisters and charged batons to disperse the agitating workers who retaliated with brickbats, stones and sticks.
At least five vehicles were burned down and 90 others vandalised while the demonstrators ransacked 11 garments and different other factories and 20 roadside buildings. Traffic movement on Chittagong Airport Road and Dhaka Airport Road and Dhaka-Sylhet Highway remained halted for hours causing severe traffic congestion and sufferings to people.
The clashes forced closure of the entire Chittagong Export Processing Zone (CEPZ) in the morning. The production at three garment units in Dhaka and another in Narayanganj were also suspended.
The law-enforcers arrested at least 50 people, including 30 in Chittagong, reports our staff correspondent in the port city.
Four people, including a rickshaw puller, were killed during a clash between police and the apparel workers at the CEPZ in the port city of Chittagong where at least 60 other people, including 25 policemen and three journalists, were injured.
Of them, eight persons were bullet-injured. Ten of the injured were admitted to the Chittagong Medical College Hospital.
Posted by sysiphus at 15:47