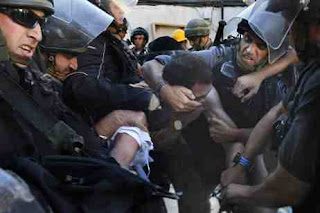 thenational
11 Dec 2010 - In the past year, criminal investigations have been opened against more than 1,200 Palestinian minors in Jerusalem suspected of hurling rocks at Israeli soldiers or Jewish settlers, according to police statistics gathered by the Association of Civil Rights in Israel (ACRI). That was nearly twice the number of children arrested last year in the much larger Palestinian territory of the West Bank.
Most of the arrests have occurred in the Silwan district, close to Jerusalem's Old City, where 350 extremist Jewish settlers have set up heavily guarded illegal enclaves among 50,000 Palestinian residents.
Late last month, in a sign of growing anger at the arrests, a large crowd in Silwan was reported to have prevented police from arresting Adam Rishek, a seven-year-old boy accused of stone-throwing. His parents later filed a complaint claiming he had been beaten by the officers.
Tensions between residents and settlers have been rising steadily since the Jerusalem municipality unveiled a plan in February to demolish dozens of Palestinian homes in the Bustan neighbourhood to expand a Bible-themed archeological park run by Elad, a settler organisation.
Posted by sysiphus at 15:42