Ancash, Peru - One dead and eight wounded by police during protest against Centaur Mining permit 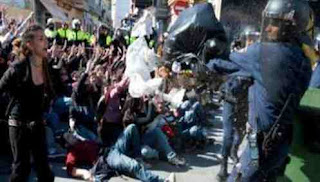 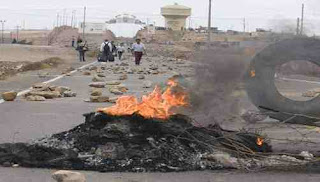 6 Dec. 2010 - One dead and eight wounded was the toll of the conflict between people of the Comune of Recuay and the National Police in Ancash. The victim was identified as Muñante Cadillo Willy Vergara (33), who died in hospital in Huaraz after receiving a gunshot wound.
The incident occurred this morning as part of a 24-hour pre-emptive strike to protest the mining concession granted to the Centaur company.
Farmers from the villages of Catac, San Miguel and Virgen del Rosario covered 167 kilometres to refuse to grant over 800 hectares of land in the community of Huambo.
The move caused several vehicles to be stranded on both sides of the road, so that the police used force to unblock the road, resulting in a violent confrontation. The villagers blame this situation on the Regional Office of Energy and Mines' permit to Centaur Mining, which they said will pollute Lake Conococha, considered a source of life.
Posted by sysiphus at 15:06