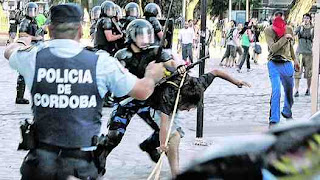 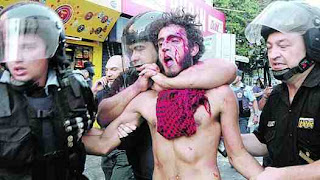 16/12/1910 - A pitched battle broke out yesterday afternoon in downtown Cordoba after the PJ and Kirchner in the Legislature approved the controversial provincial Education Act governing the programs for secondary and tertiary. Following the riots about twenty demonstrators and policemen were injured, while some students and leftist activists were arrested.
The main student complaint suggests that "the curriculum will be tailored to business, generating internships to become cheap labor. Furthermore, there is an intrusion of the Church in the State, as they teach religion."
Yesterday during the more than eight hours of debate, began at 11 am and ended at 19.30-there was much tension in the centre of Cordoba. Secondary students, tertiary and university held two marches that converged in the Plaza San Martin, one block from the Legislature.
Since Tuesday, a small group of university students began a hunger strike to protest the approval of the controversial law.
Minutes before the vote, students tried to enter the recintopara participate in the meeting and the incidents broke our.
http://cordobacontaminada.blogspot.com/2010/12/cordoba-aprobaron-una-polemica-ley-de.html
Posted by sysiphus at 14:27