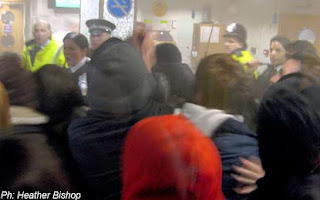 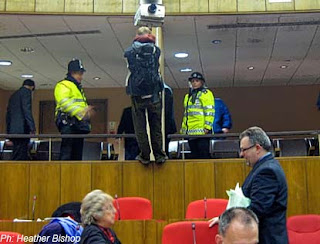 Fifteen police officers have been injured in London’s first “town hall riot” since the scale of spending cuts was unveiled last month.

About 100 protesters stormed Lewisham’s Catford headquarters as councillors prepared to vote on an £18 million package of savings. - Local officers policing an earlier peaceful demonstration were overwhelmed and had to call in riot police from the Met’s Territorial Support Group as well as mounted police and dog handlers. - As police tried to clear the town hall lobby last night, the glass doors to the building were smashed and smoke bombs let off. At one stage a demonstrator was hanging from the balcony in the council chamber and at the end of the meeting councillors were given a police escort to their cars. Three men were arrested for violent disorder, trespass and the possession of an offensive weapon and a 31-year-old woman was held for aggravated trespass.The Met said 15 officers were treated for minor injuries, with two going to hospital for treatment to a broken finger and smoke inhalation.
The trouble flared after the initial demonstration over student fees and cuts in council services was hijacked by a larger group of protesters.Campaigner Patricia Richardson, who went to the meeting to ask questions about threatened library cuts, said: “Three members of the public were causing mayhem in the council chamber and one was hanging from the balcony. We were told this could endanger us and we should leave. It was quite worrying when several police officers arrived with their riot shields. There was chaos.“Back in the lobby there was a smashed window at the entrance and about 20 police officers defending it. There were mounted police outside and the South Circular was blocked with police vehicles. It was mayhem — and no one seemed to be in charge.”

“People were angry that they couldn’t get in, especially as it was so cold. More people managed to get in by overwhelming the police after the initial 40 had gone in.”

The meeting eventually went ahead and the cuts were passed by 36 Labour councillors voting in favour, with opposition from three Conservative and Green councillors, and 11 Liberal Democrats abstaining.