NEITHER GOD NOR MASTER - NO SOVEREIGN - RELIGION DENIES THE INDIVIDUAL sprayed on Saint-Julien church in Saint-Lys, France 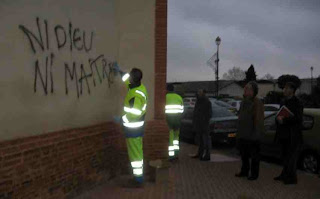 22/12/2010 - La Depeche - "Neither God nor master", "no sovereign", "religion denies the individual" ... these messages in the form of large tags on three walls of the facade of the church of St. Julien.
On the night of Sunday to Monday, the pastor's house had been targeted by taggers, but the messages were written with gold powder. "The Santas were also thrown in my garden. I managed to remove the tags. Those of place of worship were written more savagely, black, à la bombe".
A resident of Rectory Street said: "This has certainly happened at 2 o'clock on the night of Monday to Tuesday. Because there were noises outside and saw a crowd of young people at that side of the church where the walls were painted. "
Throughout the day yesterday, the technical services officers have been deleting messages on the three walls of the landmark and historic nineteenth century parish. With a pressure hose, they somehow managed to blur the provocative messages. The authors of these degradations are actively being sought by the gendarmerie.
Posted by sysiphus at 12:58