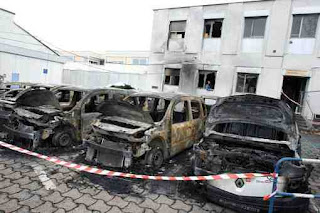 cette semaine
Progress, 06.12.2010 - Yesterday morning, two separate outbreaks of fire caused the destruction of cars parked at the TCL depot in the 8th district. One person was placed in custody "This is just the hardware. There were no injuries and that is the main thing, "says Karim, TCL controller, looking at the two officers from the forensic fussing around ten burned cars.
Sunday shortly before 4 pm, firefighters were called to a fire at the TCL depot in Lavirotte and Audibert streets in the 8th arrondissement of Lyon. At this hour, none of the 500 employees (drivers, maintenance workers, supervisors) can be found on the site. Only the security guards who make rounds with several companies. The street is deserted, surrounded by corporations and the Guillotière cemetery. The depot, meanwhile, is closed by a large blue gate but a wall of only 1.20 meters in height allows anyone to enter.
Fifteen soldiers and ten fire engines, four spears, were mobilized to contain a fire that could spread to the premises of the "Directorate of Security" nearby. The worst is avoided for the building came out with broken windows and a blackened facade. In contrast, ten vehicles used by TCL controllers, overwhelmingly Renault Kangoo, are completely charred. "A sad spectacle," said sorry Bernard Rivalta, president of Sytral, who went up yesterday morning. The buses, parked in a hangar at several metres from the parking lot, were not affected. According to preliminary investigations, two separate outbreaks of fire were found, confirming the thesis of arson. The wind and the proximity between the cars, parked in two rows, contributed to the rapid spread of fire.
Shortly after the incident, police arrested a person close to the disaster. He was remanded in custody, the time to conduct verifications, including his movements. "No, for the moment there is no decisive evidence to say that it was he," said a judicial source. Prints from his hands were taken yesterday. Results are expected today.
Posted by sysiphus at 04:59