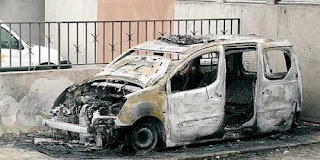 Midi Libre, Saturday, November 27, 2010 - At Aimargues, a city police car was torched on the night of Friday to Saturday around 3:00. The vehicle was parked in a courtyard near the offices of the municipal police and the school canteen. The smoke spread to the school canteen. The commons community decided yesterday to transfer the children's canteen to the Lucienne Dumas hall, at least for Monday.
The hypothesis of a fire resulting from arson seems to be confirmed. A witness reportedly saw two people fleeing. The same night, one or more criminals broke into the butchers Vergonnier, rue de l'Horloge, and destroyed the store's surveillance camera. They took the cash register which contained some money. These two events follow a series of fires and damage to cars that infuriate the public.
Posted by sysiphus at 00:21