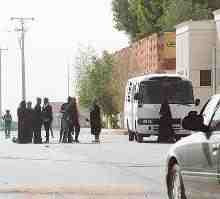 saudigazette
14 december 2010 - MADINA: Officials from six government agencies and 40 security officers, including Maj. Gen. Awad Al-Qahtani, Director of Police in Madina, and 12 women jailers restored order at a girls’ orphanage after some female inmates rioted and held the orphanage’s principal and social workers, according to sources.
The situation at Orphan’s Village was resolved peacefully and there were no injuries, officials said. Hatim Ameen Bari, Director of the Ministry of Social Affairs in Madina didn’t elaborate on the causes of the incident due to its sensitivity.
Before they came out of the orphanage, the rioting girls were throwing stones at some girls who were passing by, according to sources.
Bari and some female supervisors from the ministry’s branch in Madina arrived at the scene and made efforts to control the situation, officials said.
A source said a committee of officials from the ministry and Madina Police had probed a similar incident in the past month.
The investigation included scrutiny of security guards deployed at the facility, the source added.
The committee has completed the investigations and submitted its recommendations to Prince Abdulaziz Bin Majed, Emir of Madina, the source said.
The orphanage, which shelters 60 female orphans, witnessed a similar incident when its staff poured diesel fuel on the walls to prevent inmates from escaping, which led to the intervention of members of the National Society for Human Rights in Madina.
The members, who made it clear that the action violated the orphans’ rights, said the riots were caused by a lack of a rehabilitation program, poor standard of living and services and a lack of psychologists.
Posted by sysiphus at 09:38