A short report from Athens December 15 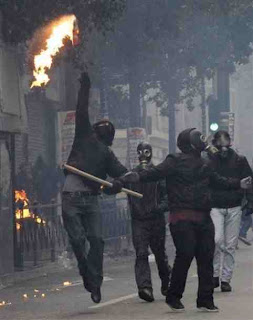 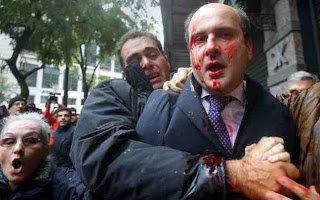 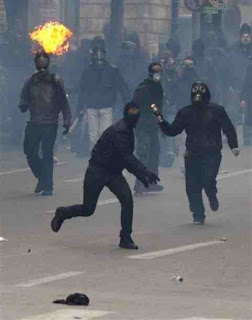 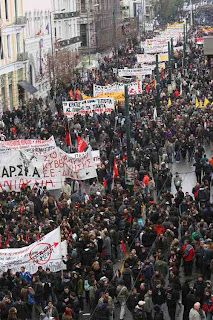 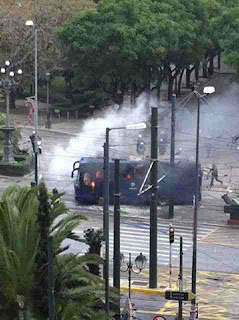 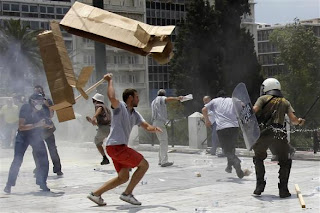 15 Dec. 2010 - More than 150-200.000 people to the streets with angry moods. People from the organized political scene (anarchists and antiauthoritarians, leftists, a separate march for PAME-KKE stalinists), base syndicats and workers' groups, and also many "mainstream" workers (the strike was called and covered by the main sell-out trade union umbrella GSEE, and others (an initiative of families with more than 3 children: they are somewhat of privileged traditionally in Greece, a status they lose to the austerity measures now), neighbourhood and residents' assemblies and anti-garbage-dump initiatives (there is actually a violent clash and police occupation in Keratea's planned dump outside Athens these days). Most of the country's economy was blocked, since workers in ports, airports, trains, banks etc went on a strike.

Some speak of as large a participation as on the May 5th demo (~300.000. where 3 bank employees died in a fire caught from molotov cocktails, locked inside their bank). Probably this was one of the reasons there was a real restriction of using fire against such buildings in this demo, virtually all of the "cocktails" were offered to the cops (also to a few luxurious cars). One of the few exceptions was the Grande Bretagne hotel opposite the parliament that got hit by some really strong kind of firecrackers. Also, a former right-wing minister (Hadjidakis) got spotted and was beaten to bleeding by mainly middle-aged "mainstream" demonstrators. Hours of strong clashes around Syntagma square (parliament) and all the way to the Polytechnic.

The police gangs of Dias/Delta motorbike cops had their asses kicked maybe for the first time on such a massive scale, same goes for their riot-cop mates. At least 2 of their bikes were set on fire http://athens.indymedia.org/local/webcast/uploads/img_0248.jpg (also a riot police van) while many of their "kamikazee" attacks against the crowds were repelled with stone pelting and face-to-face fights by all means! To get even, they retaliated against passersby and isolated demonstrators. Thousands of plain-clothes & hooded pigs in large masses of 50-100 or more, sometimes even entering the demonstrations seemingly as yet another block! Many demonstrators got followed by such pigs after the demo and some got abused or even prosecuted for a "control check" at the police headquarters (a police tactic to intimidate and scare individuals out of participating in angry demos). Lots of people retreated to the Polytechnic university, around which battles with every kind of cops followed.

The plain-clothes cops took care of the greatest part of the repressive work today, this could be a new police tactic for demos in Greece, since in such a way the police doesn't seem so much (good for the TV and foreign press), but is more invasive and uncontrollable.

The people seemed to be overwhelmed with anger rather than fear of the police State terror, much actions of solidarity were demonstrated leading to a relatively small amount of arrests-kidnaps of demonstrators by the cops.

Some also speak of fascists with batons around the cops, attacking retreating demonstrators, but they could be as well plain clothes officers, as there aren't any differences in our days, except for a salary (the cops are probably the only "employees" in the country -ok maybe also the priests, judges...you get the idea- that don't suffer huge >30% wage cuts).

After the demo police took over seemingly every street in central Athens, while motorbike patrols moved into Exarchia, to take over the streets, probably to prevent people staying out and moving to any strategic occupations and plans for the next moves.
Posted by sysiphus at 13:59