Rovereto and Trento, Italy - Police raids on many anarchists' homes looking for traces of paint 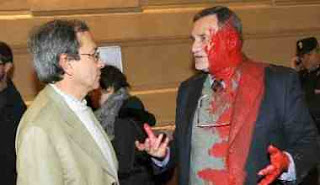 culmine
Neropiceno.noblogs - 2010 12 03 - Developments in the investigation of 28 October in Sociology, where Professor Robert Toniatti was covered with paint - investigators raid homes of eighteen anarchists in Trento, Rovereto in the Veneto region, to find clothing with traces of paint. During the blitz a group of anarchists had disrupted a conference on military missions abroad, throwing paint against the speakers. The searches carried out by the police department's operational control of the province of Trento, on the orders of deputy prosecutor Giuseppe De Benedetto, involved 18 members of the anarchist area in Rovereto. It will now be the judiciary to consider the results of searches for any criminal penalties. On the day of the attack had been arrested a young man from Rovereto was arrested in flagrante delicto, and was convicted in a summary trial to six months' imprisonment and released under house arrest. Investigations were carried outto identify other members of the group.
Posted by sysiphus at 14:36