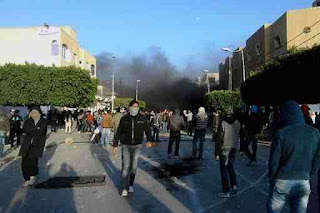 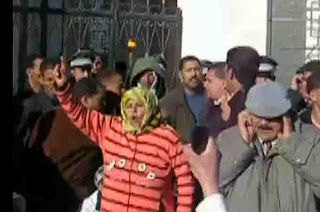 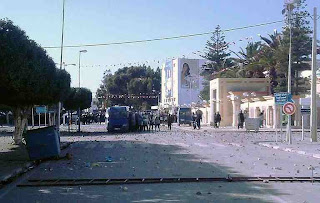 AFP
25 Dec. 2010 - TUNIS — A Tunisian teenager died on Friday and ten others were injured when protestors attacked a national guard post in a region gripped by tensions over youth joblessness, students and the government said.
Mohamed Ammari, who was 18, died when he was shot in the chest during a confrontation with security forces in the town of Menzel Bouzaiene, in the central Sidi Bouzid region, said student representative Mohamed Fadhel.
Several thousand people took part in the protest, which quickly turned violent, said Fadhel.Protesters set fire to three police cars, a train locomotive, the local headquarters of the ruling Constitutional Democratic Rally party and a national guard post, whose guards had to seek shelter in a mosque, Fadhel said.
Police had surrounded the town and were not letting people travel in or out, and many arrests had been made, he said.
The government confirmed the incident, and said two members of the national guard were in a serious condition with burns.
"The groups involved in these acts of violence and trouble encircled and attacked a national guard post by throwing fire bombs and stones," a source at the interior ministry told AFP.
After attempting to disperse the crowd by firing warning shots, security forces opened fire in self defence, said the official.
"This incident led to one death and two injured among the attackers. Several national guard agents suffered burns, including two who are in a coma," said a government statement published by its information service.
Tensions have been simmering in the region since the attempted suicide on December 17 of 26-year-old university graduate Mohammed Bouazizi, who was forced to scratch out a living peddling fruit and vegetables because he could not find a job.
When police confiscated his produce because he did not have the necessary permit, he doused himself in petrol and set himself alight, said the Tunisian League for the Defence of Human Rights.
Bouazizi was transferred to a hospital in capital Tunis with severe burns.
The incident prompted violent demonstrations in which protestors burned tyres and chanted slogans demanding jobs.
The government said the violence was isolated and had been exploited by the opposition.Tensions heightened on December 22 when another young man, Sidi Bouzid, climbed up an electricity pylon and electrocuted himself on the cables, saying he was fed up with being unemployed.
Posted by sysiphus at 02:10