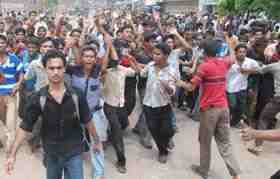 5 December 2010n - At least 10 people, including two policemen, were injured in a clash between law enforcers and garment workers over the sudden closure of a factory at Jamgara in Ashulia yesterday.
Sources said nearly 1,700 workers of Universe Knitwear Factory reached their workplace in the morning to find that the unit has been shut down. No prior notice was served.
Incensed at the incident, the workers gathered at Jamgara Government Primary School compound and started chanting slogans against the authority. At one stage they gathered by the Dhaka-Tangail highway in a bid to block it.
The clash ensued when the agitating workers tried to put a barricade on the highway around 9:30am, said Sirajul Islam, officer-in-charge (OC) of Ashulia Police Station.
The workers also started throwing brickbats at the law enforcers, to which the police retaliated with tear gas shells and rubber bullets, added the OC. The workers were dispersed around 10:00am.
Sub-inspector Shahen Shah Parvez said “I with a team of six police personnel reached the spot. The workers hurled brickbats at us leaving one of my colleagues and myself injured.”
The SI added they took shelter behind a shop and on information another team rescued them.
At least eight factory workers sustained injuries during the clash, said locals.
Managing Director of the factory Hossain Shah Zaved, however, claimed the factory management was compelled to shut down the factory temporarily fearing more unrest.
The workers had been agitating since Wednesday demanding almost double the rate per piece for production of sweater. Zaved termed the demand unusual.
The factory will resume production once normalcy returns, he said, adding a negotiation between the workers and the management was going on to resolve the crisis.
Police arrested three factory workers at noon in this connection.
Meanwhile, around 3000 workers of Palmal Sweater Ltd abstained from work at its factory at Ashulia from 11:00am demanding pay hike.
SI Parvez said police personnel were deployed in and around the factory to avert any breach of peace.
One of the directors of the factory said they would sit with the workers today to settle the matter.
He added the workers left the factory in the afternoon.
...
A case has been filed with Ashulia Police Station on Saturday night against 700-800 unknown apparel workers naming seven to eight in connection with Saturdays’ clash between garment workers and policemen in the capitals’ outskirt Ashulia area.
Posted by sysiphus at 13:34