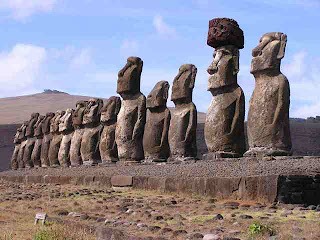 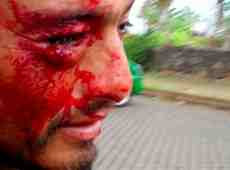 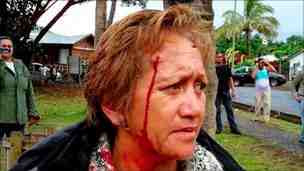 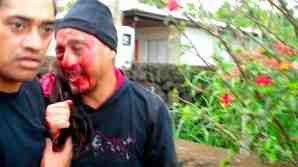 bbc.world-latin-america
Witnesses say police fired pellets as they tried to evict several indigenous inhabitants from buildings they occupied earlier this year.
The Rapa Nui group say the buildings were illegally taken from their ancestors several generations ago.
Easter Island, which was annexed by Chile in 1888, is a Unesco World Heritage Site.
Chilean security forces began their operation in the early hours of the morning, says reports.
When the group refused to leave and others gathered at the scene, they opened fire with pellet guns.
Officials said 17 police officers and eight civilians had been injured. But the Rapa Nui put the number of injured locals at 19, and denied that any police had been hurt.
A statement on the Save Rapa Nui website said several people had been shot at close range. It said police had used rubber bullets and tear gas.
"They injured at least 23 of our brothers and sisters, three of them seriously," Edi Tuki, a relative of one of those injured, told the Efe news agency.
"One was shot in the eye with a buckshot pellet from just a metre away."'Shooting to kill'
Maka Atan, a Rapa Nui lawyer, told the Associated Press police had been "shooting to kill". He said he was shot in the back by pellets.
"It seems like this is going to end with them killing the Rapa Nui," he said.
Rapa Nui is the official name for the remote Easter Island, which lies more than 3,200 km (2,000 miles) off the west coast of Chile.
The tiny island has a population of about 4,000 but is best known for its ancient giant carved stone heads, known as Moais.

The indigenous Rapa Nui people have been protesting for the past three months about what say are plans to develop the island, as immigration and tourism increase.
They are demanding the return of ancestral land they say was unlawfully seized from their grandparents.
"The land on this island has always been Rapa Nui. That's why we're asking for our land to be returned," Mr Maka told AP.
Posted by sysiphus at 15:02