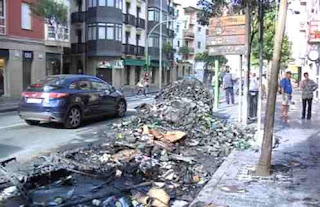 elcorreo
BILBAO, 19/08/2010 - The wave of attacks, street violence that began eleven days ago in Maruri and Ondarroa continued Tuesday in the capital of Alava with the burning of two containers by half a dozen hooded people.
For the police, the recent riots represent a qualitative leap in the campaign of street violence triggered this month and, according to sources, show that there is a reorganization within the ranks of the radicals, especially after the police exerted pressure for months had seriously hampered, or directly prevented many of their movements.
The riots took place in Vitoria at 21.45 hours in the neighbourhood of Zaramaga. In Mendoza six people with their faces hidden approached two containers in the street and set fire to them. They fled in a hurry and disappeared into the adjacent side streets.
The attack marks a difference from those that occurred in the early hours of Tuesday in Azkoitia, or last week in Zarautz, where street violence activists came to burn thirty garbage containers while the town celebrated its party (up to now it has been customary for the radical environment to provoke incidents that time). In Vitoria, however, there were celebrations and it has been shown that the attackers were perfectly covered up. Police experts say the fact that it was half a dozen hooded people is already a sign of a more organized decision to commit a higher level of street violence. Moreover, the continuit, there have now been six attacks of street violence since August 8, making the police believe that there is some kind of slogan at the base of carrying out this wave of unrest. Nor is it considered a coincidence that two large parties at the San Fermin in Pamplona and Vitoria passed without any disturbances, and that the escalation has occurred in recent days. According to some analysts of the security forces, it is still early to know which factors are behind this activation of street violence, but they are certain that there is a reorganization of the structures among radicals responsible for coordinating and controlling the attacks
Posted by sysiphus at 15:17