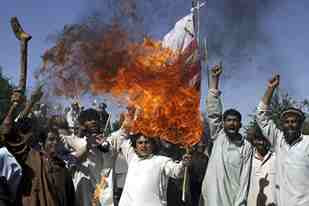 signalfire
18/08/2010 - Hundreds of villagers have blocked a highway in eastern Afghanistan to protest a night raid by Nato and Afghan soldiers that left two people dead.
A statement from the Nato-led International Security Assistance Force (Isaf) said two “Taliban insurgents” were killed in the raid in a district near Jalalabad.
But villagers said the men were civilians; their protest temporarily closed the highway connecting Jalalabad to Pakistan on Wednesday.
“The Americans who killed these people should come and see whether it is civilians or insurgents they killed,” Mohammad Gul, one of the protesters, said. “We need an explanation from them.”
Many of the protesters chanted anti-American slogans, like “down with Obama” and “down with foreign forces,” during the hours-long protest.
Isaf said the men had been involved in roadside bomb attacks, and that Nato and Afghan soldiers were fired upon from “multiple directions” as they entered the compound.
The protest mirrored a similar demonstration last week, when Nato and Afghan forces raided a house in Wardak province. Neighbours claimed the night raid killed three civilians, and hundreds of them took to the streets to protest the following afternoon.
Afghans have staged a number of similar protests in recent months: Villagers near Jalalabad burned tyres in May after a night raid killed at least nine people, and hundreds protested after Nato troops opened fire on a bus in Kandahar in April.
Posted by sysiphus at 16:09