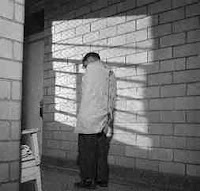 12 August 2010 - Police in riot gear in psychiatric hospitals in the Republic of Ireland.
The revelation was made in a disturbing new report which revealed that hundreds of psychiatric nurses have been forced to retire because of growing violence, stress and staff cuts.
...
The report also revealed that hospitals were forced to call in gardai in riot gear to deal with violent disturbances. However, it declined to say where [and why!]these incidents happened.
Private security firms were employed in Ennis; at St Ita's in Portrane; St Brendan's on Rathdown Road in Dublin and at Naas hospitals.
In Tallaght, an elderly patient was stabbed and there were 51 assaults on staff working in St Brendan's in the first half of the year.
Gardai in riot gear have been called to acute and secure facilities. In Ennis, one patient is guarded around the clock.
Last week, a patient set fire to a unit in Tallaght Hospital, leaving two nurses with burns and suffering from smoke inhalation, PNA general secretary Des Kavanagh said.
There has been an overall 20pc increase in suicides, up from 424 in 2008 to 527 last year, which is putting mental-health services under severe pressure.
A total of 11,966 people attended accident and emergency units because of self-harm. Some 2,500 of these had attempted self-harm previously.
Posted by sysiphus at 14:42