ANOTHER PRISONER INJURED IN GREECE 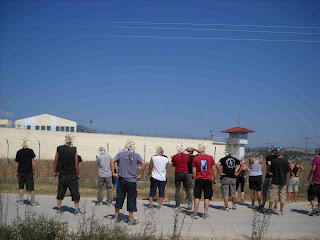 The injury of another prisoner in Grevena prisons caused a riot today. Prisoners burnt their mattresses demanding better living conditions, more leave days etc. The conditions in most of democracy's hell holes are inhuman.
FIRE TO THE PRISONS
Vangelis Pallis (49 years old), aka ‘Apache’, seriously injured inside Trikala’s jail Saturday, August 28, 2010
This morning, at 9 o’ clock, Vangelis Pallis was found in his cell seriously injured in the neck by a piece of glass. The headquarters of the jail said that he did it by himself. The advocate ordered his cell to be sealed for further investigation. Vangelis Pallis is now in the intensive care, hospitalized in a very serious situation.
Vangelis Pallis has many times in the past participated in riots inside the jail. In the big riot in the jails in November 2008, as he was a member of the steering committee, he was on a hunger strike for a long time. People that know him say that there is not even one chance in a million that he injured himself with his own will
As you understand, he is fighting against the cruel conditions of the jail. Therefore, our suspicions about what really happened are not unrealistic.
Updates soon.
Picture from athens.indymedia.org outside Trikala jail Aug 2010
Posted by sysiphus at 03:47