Atlanta, Georgia - 30,000 people in need of housing turn up at shopping centre 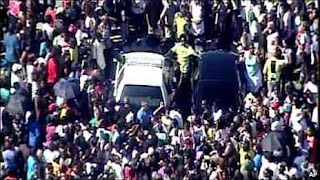 bbc us
12 August - Some 30,000 people lined up outside a local shopping centre in Atlanta, Georgia, on Wednesday in the hope of receiving public housing assistance.
The authorities were unprepared for the throng, which was unruly at times. Amid sweltering conditions, 62 people were hurt and 20 needed hospital care.
Only 455 rent assistance vouchers and 200 public housing spaces were on offer - while 13,000 applications were taken.
Some had lined up since Sunday for the possibility of discounted rent.
It was the first time in eight years that the housing authority in East Point, a municipality in south-west Atlanta, had accepted applications for public housing and rent subsidies, known as Section 8 vouchers.
People are desperate. They are really willing to do whatever it takes to get into housing”End Quote Associate Professor James Fraser Vanderbilt University
Authorities estimate it will be six months before any vacancies become available for the small number of successful applicants.
Most of the 16 other local housing authorities in Atlanta have closed their waiting lists. But Section 8 vouchers are portable, so people flocked from across the city for a chance to receive housing aid.
Atlanta is an economically polarized city: it has the fastest growing number of millionaires in the US but also has the third-highest proportion of people living below 50% of the poverty line.
Posted by sysiphus at 15:41