Darwin - Fire, prisoners on the roof at Australian immigration centre 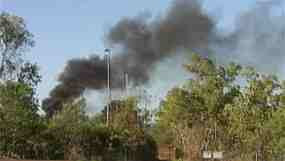 29 August 2010 - SYDNEY - Masked men, some armed with long poles, are standing on the roof of an Australian immigration centre in which a fire broke out Sunday, reports said.
One section of the Darwin Immigration Detention Centre, which houses up to 500 asylum-seekers, had been on fire but the flames had now been put out, the Australian Broadcasting Corporation said.
The immigration department refused to give details but said they were working with emergency services to deal with the incident.
"There’s an ongoing incident at the centre," a spokesman told AFP.
Reports said about a dozen men were on top of the building, banging on the roof and making noise, and attempting to stop anyone climbing up to join them.
The men appeared to be wearing masks while some were wearing hoods and others had paint on their faces, the ABC said.
Australia has a policy of mandatory detention for boatpeople and generally processes asylum-seekers at Christmas Island in the Indian Ocean but increased numbers of arrivals has recently forced the reopening of centres on the mainland.
Posted by sysiphus at 09:46