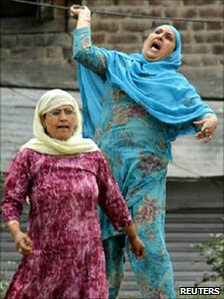 thevastminority
16/08/2010 - WOMEN are playing an incrasing frontline role in the Kashmiri people's struggle for freedom. Reports Soutik Biswas for the BBC: "Young and old, middle-class and poor, mostly dressed in floral tunics, they defy the armed forces, pelting stones at them, shouting slogans and singing anti-India songs. When night falls, some of them even lead protests with their children."Firdousi Farooq became involved after her 14-year-old son was murdered by Indian state forces who claimed the studious youngster was a "miscreant who was part of an unlawful assembly".
She said: "Why should I not protest? Why should I not pick up a stone? I am doing this in the honour of my martyred son. I am doing this for azadi (freedom) from subjugation and repression."
Adds Zaitun Khan, a young woman whose brother was murdered by state forces while on his way to work: "I will go and join the protests now. He never protested or threw a stone in his life. But he died. How many more men will have to die? I want to go out and protest and demand freedom. Freedom to live."
The report explains this is not the first time that women in Kashmir have come out in droves to protest, but their numbers and impact appear to be greater than ever before.
Posted by sysiphus at 17:19