USA - Repressive structures up in flames 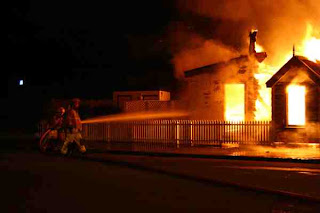 signalfire
Kaikoura courthouse destroyed by fire yesterday morning.
25/08/2010 - Detective Richard Rolton, of Blenheim, said police had found the area someone had broken into the building and where they believed the fire started.
The remains of the 119-year-old courthouse will be demolished today as it was a risk to the public.
Kaikoura District Court manager Pip O’Connell said he had not yet found an venue for the next sitting of the District Court on September 10. He did not know if the courthouse would be rebuilt.
Fire Destroys Wisconsin Parole Office
08/25/2010 - A two-alarm fire destroyed a parole and probation office on 73rd Street and Capitol Drive at about 4:30 a.m. Tuesday.
Bright orange flames seared through the roof as firefighters began their attack about 4:30 a.m.
Afraid the roof would cave in, the firefight moved from the inside out. A second alarm sounded, and the fire was finally extinguished. Those first firefighters at the scene became a key part of the investigation.
Investigators won’t say yet if the fire is arson. Once the flames turned to ash, police and state Fire Marshal’s Office joined in, looking for clues as to how the fire started.
A rock appears to have shattered the front door and firefighters could tell where the flames first sparked.
The Department of Corrections is trying to salvage what records it can and is temporarily moving its 28 employees and operations to another location
Arson suspected at Liverpool Council chambers
25 August 2010 - POLICE have confirmed the devastating fire which destroyed Liverpool Council chambers on August 15 is being treated as suspicious.
The case has been taken over by the State Crime Command’s arson squad, which will continue the investigation into the fire.
Strike Force Guideon has been set up to focus solely on the investigation.
At 12.35am on Sunday, August 15, police and NSW Fire Brigades crews responded to the fire at the council’s chambers and administration centre on Hoxton Park Rd.
By the time crews arrived the fire was already alight with the building engulfed in flames.
An intruder alert sounded just before the fire started.
No one was injured as a result of the blaze.
Molotov cocktail hurled into new cell phone store
The arson squad is investigating after a Molotov cocktail was hurled at the ground floor of a commercial/residential building in Rosemont.
An alarm went off at 3:50 a.m. Wednesday when the front window was shattered, and a Molotov cocktail tossed into the store.Firefighters were quick to arrive at the scene, and were able to limit damage to the front of the building located at 2565 Belanger, near Molson.Nobody was injured in the attack, and none of the apartments above the store were damaged in any way.Investigators are gathering evidence to determine who pitched the incendiary device into the new store, which was reportedly set to open soon for business.
Girl, 15, charged with school arson
Tuesday, August 24, 2010 - A 15-year-old girl from Moosomin First Nation has been charged with arson following an Aug. 18 fire that destroyed a school trailer.
The fire also damaged a building adjacent to the wrecked school trailer, the RCMP said.
The girl is scheduled to appear in North Battleford provincial court on Sept. 23.
It was the second time public buildings burned on the reserve this summer.
On June 23, the RCMP office was substantially damaged by an early morning fire, which the RCMP suspected was arson.
No one has been charged in connection with that fire.
Moosomin First Nation is about 35 kilometres north of North Battleford.
Posted by sysiphus at 19:05