19 year old Richard Ñegüey Pilquimán, one of the 19 Mapuche on trial for resistance to Lleu Lleu is dead. 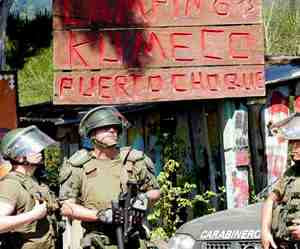 culmine
Mapuche territory - paismapuche.org, August 22, 2010 - Richard Ñegüey Pilquimán only 19 years, died in his community, in Puerto Choque, Lleu Lleu. He apparently committed suicide. He was one of the 19 Mapuche on trial for resistance to Lleu Lleu, and was free but with restrictions.
The information was provided by the chief prosecutor of the Cañete Radio Bio Bio. Police said it "rejects the intervention of third parties."
Richard Ñegüey was accused of "illicit association to steal firewood” concerning the recuperation that his people were carrying out in the area of Puerto Choque, south of Lake Lleu Lleu.
Richard is the son of Peru Ñegüey Segundo, also indicted in the same trial.
What is strange is that out of the 19 accused, he was the one that risked the least years in prison. The sentence sought by the antimapuche prosecutor was 301 days in jail, and as Richard had no previous convictions, he could remain at liberty.
Accusations made by young people of Lleu Lleu, under threat of attorney Andres Cruz to defame the community and go on trial as protected witnesses should be held in consideration.
--------
Freedom to all mapuche political prisoners ! NOW!!
CHILEAN COURT AUTHORISED THE FORCE FEEDING OF THE MAPUCHE POLITICAL PRISONERS ON HUNGER STRIKE
very bad news...
The tribunal of Concepcion decided that the prison guards can forcefully feed the Mapuche prisoners that are on hunger strike. There are 8 mapuche in the prisons of El manzano and in Lebu. 44 days after the hunger strike started, dizziness, alteration of the dreams, collapsing and even loss of consciousness is affecting the mobilization of those on hunger strike.
read news and communiques: http://actforfreedomnow.blogspot.com/2010/08/freedom-to-all-mapuche-political.html
Posted by sysiphus at 13:15