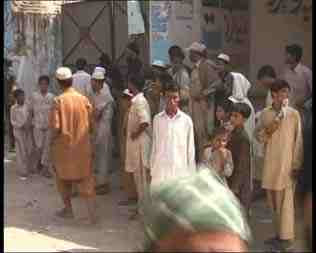 samaa
17/08/2010 - The government has not done enough to help the homeless flood victims of Naushero Feroze. When they tried to complain, they been brutally charged with batons. The same situation developed upon the departure of PML-N chief Nawaz Sharif from Sukkur, SAMAA reported on Tuesday.
According to details, after hearing about the arrival of Sindh Chief Minister Qaim Ali Shah, the flood victims of Naushero Feroze reached near the Dadu-Moro Bridge, but for security reasons the administration did not allow them to go ahead.The flood victims tried to move ahead and after failing they started to protest aginst the restriction on their movement. The administration initially showered them with kicks and punches and later on thrashed them with batons.
Consequently, many sustained injuries.
Syed Zafar Ali Shah (MNA) has strongly condemned the baton charge and said that there was no reason to torture those who are already suffering from various troubles.
After Nawaz Sharif's departure from Degree College Relief Camp in Sukkur, there was unrest during the distribution of aid items. The police started a baton charge to control the flood victims. Consequently, many women and children sustained injuries; an old lady fainted.
According to the flood victims, without any planning the administration started to distribute aid items and all the deserving flood victims with cards were being ignored. Things were being distributed among the chosen known people which caused unrest and the situation got out of control.
Posted by sysiphus at 15:56