ANTI-ANARCHIST REPRESSION IN CHILE. Immediate freedom to the 14!!! 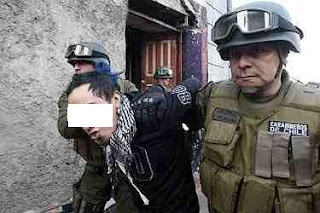 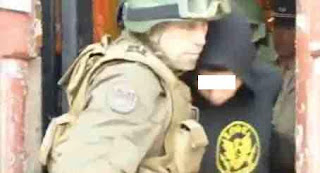 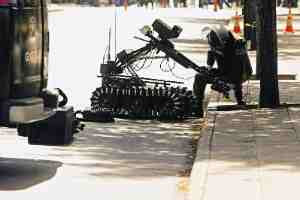 16 August 2010 - As was foreseeable and had been widely preannounced by the Chilean media, on August 14 a great round-up of anti-authoritarians and anarchists took place in Chile. Various social centres were raided and written material confiscated. 14 comrades were arrested. According to the Chilean media, investigations concerning over 100 explosive and arson attacks in Chile also concern European citizens, in particolar some Italians. Culmine, given the urgency of spreading information and communiques about the arrests, will publish material in Spanish and translate it into English as soon as possible. Given the seriousness of the attack on the Chilean anarchist movement, Culmine are available right away to spread solidarity initiatives for the arrested comrades struck by the repression.
a strong embrace to the Chilean comrades
Immediate freedom to the 14!!!
Culmine

It is not known who the other two comrades are.
We are in contact with our brothers, hopefully everything will work out for the best
Death to the police


from the Chilean media, Santiago Times (read with care)

Raids Lead To Arrest Of 14 Alleged Members Of Chilean Anarchist Group
Monday, 16 August 2010 00:52
Police say financing likely came from Italy, Greece, Mexico and Argentina.
Police on Saturday led simultaneous raids that resulted in the arrests of 14 people suspected of belonging to a Chilean anarchist group accused of more than 100 bombings.
“Operation Salamander” culminated with 200 special forces troops and police raiding 17 homes in Santiago and two in Valparaíso over the weekend. Those arrested are accused of being involved in bombings and other suspicious activities that have affected banks, businesses, police stations, hotels, churches and gymnasiums, according to Metropolitan District Attorney Alejandro Peña, who was in charge of the operation.
“The arrest warrants are for the crime of terrorist conspiracy and placing explosive devices to produce fear in the population,” Peña said at a press conference after the arrests were made.Police have divided the organization into two subgroups. The first, they say, was responsible for planning, giving orders and delivering explosives.
Those arrested from this side include Andrea Urzua, who was also arrested with explosives in Neuquén, Argentina, in 2008.
Another member of this part of the organization apprehended Saturday is Rodolfo Retamales Leiva. Police accused Leiva of leading the anarchist network. He was arrested at his home near the center of Santiago. Leiva in turn accused the police of beating him during the raid. His attorney, Alberto Espinoza, said Leiva was innocent and was being linked with the organization only because of his past.
Leiva, known as “The Heron,” has a history of activism. He became a member of the Lautaro Youth Movement in 1989 while studying at Universidad Central, and in the early 1990s, he was involved in robberies and planting explosives. In 1992, he was arrested in connection with the murder of three detectives guarding the house of former Metropolitan Region Gov. Luis Pareto. In 1994 he was sentenced to 40 years in prison for the crime, but he was given early parole in 2004.His parent’s house was also raided, where his mother’s computer was seized. Leiva's mother, Maria Cecilia Leiva, was agriculture undersecretary under the government of former President Michelle Bachelet. Neither of his parents is under investigation.
The other subgroup of the anarchist organization described by the police is said to be in charge of operational aspects. Members of this division planted the bombs, they say. Seven of the people arrested are linked to this group.
The police also reported information regarding the group’s financial activities. Accounts at a Chilean bank were frozen and closed off from transfers. The manager of the funds, Óscar Omar Hermosilla, was arrested Saturday, as was Carlos Riveros Luttge, accused of financing the group.
Using an informant, police discovered international transfers to the account. Through the Cayman Islands, at least two deposits were made from Europe by Italian citizen Matteo Rossi. Rossi had visited Chile in 2008 and had contacted Riveros. Prosecutors say that a few years ago, the group was probably receiving money from countries such as Italy, Greece, Mexico and Argentina. The money was used for making explosives, finding houses for squatters and expenses of the group’s leaders.
A Santiago court requested that the detainees be held in solitary confinement in a maximum security prison. Surveillance has also been increased on other suspects, in case any further attacks are planned in light of Saturday’s raid.
Police say the investigation has lasted four years. The operation was conducted with the help of analyzing networks, forming contacts, wiretapping and monitoring houses.
Interior Minister Rodrigo Hinzpeter became involved in the operation in recent days and was briefed on the operation at a meeting with the prosecutor.
“There is no doubt that to bomb any country that claims to be modern and developed is a terrible crime,” Hinzpeter said. “And therefore, the government as plaintiff will apply the highest possible sanctions under the rule of law.”
Posted by sysiphus at 11:17