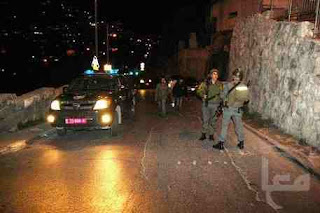 sabanews
GAZA, Aug 30 (Saba) — Violent clashes erupted at dawn Monday between Israeli police and army forces and residents of the Jerusalem suburb of Silwan where many civians were arrested, according to Kuwait News Agency (KUNA).
Local radios said that Israeli police, army and intelligence forces stormed several homes in Silwan, arresting six Palestinians, including a woman.
They said that Palestinian youngsters pelted Israeli forces with stones and empty glass bottles. Occupation troops fired rubber and metal bullets, sound bombs and tear gas at the angry crowds. No casualties were reported.
The arrests have been on for several days after Palestinians confronted radical Jewish groups which attempted to storm an ancient mosque. Several cars belonging to these groups were set ablaze.
Posted by sysiphus at 12:01