Chittagong, Bangladesh - University closed after 8 days of violent clashes over rise in fees 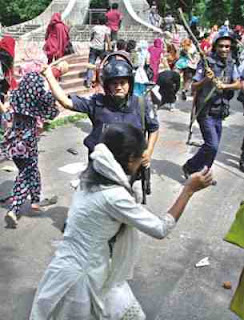 August 3, 2010 - The authorities yesterday closed Chittagong University till September 16 following a series of violent clashes between agitating students and police that left over 50 students and 20 policemen injured.
Police detained around 50 students during clashes in the morning and held 200 more after raiding three male dormitories in the afternoon.
The CU syndicate in an hour-long meeting that started around 3:00pm took the decision of closing the university in the wake of the violent situation, said CU Vice Chancellor (VC) Prof Abu Yusuf.
Male students were asked to vacate their dormitories by 6:00pm yesterday and female students by 10:00am today, he said.
Earlier in the morning, over 1,500 students brought out a procession from Chittagong University Central Students’ Union (CUCSU) building around 10.00am to continue their protest for the eighth consecutive day to press home their three-point demand including cancellation of fee-hike.
As police intercepted the procession near Arts Faculty the agitating students were locked in a clash with them.
At least 15 students, including a journalist were injured as police charged batons on the demonstrating students.
The aggrieved students in different groups then went on the rampage at CUCSU building and different faculty buildings protesting the police attack.
The clash took a violent turn when police lobbed tear shells and fired rubber bullets on them near Arts Faculty around 11:00pm prompting the students to retaliate with stones and brickbats.
Police hurled tear shells and fired rubber bullets to disperse another group of agitating students near Shaheed Minar around 12:00 noon.
The law enforcers also fired rubber bullets and teargas shells inside Shamsunnahar Hall where the students took shelter as police went on a counter offensive.
Protesting the police attack, around 1,000 female students from Shamsunnahar and Pritilata Halls brought out a procession around 1:30pm. As the procession reached near Shaheed Minar, police charged batons to disperse them injuring around 50 female students.
Prosenjit, a student, claimed that at least 200 students were injured in yesterday’s series of clashes and many of them were rubber bullet-hit.
The situation came under control at about 3:00pm as the students started leaving the campus.
Officer-in-Charge Mohiuddin Selim of Hathazari Police Station said around 250 rounds of rubber bullets were fired and over 60 tear-gas canisters were lobbed to bring the situation under control.
At least 20 policemen including him and ASP of Hathazari circle Babul Akhter were injured by stones thrown at them, the OC said adding that they detained around 50 students from different spots of the campus during the clash.
Police raided Shahjalal Hall, Shah Amanat Hall and Suhrawardi Hall around 4:00pm and picked over 200 students from there, he added.
Posted by sysiphus at 12:55