Rioting in Kabul after US embassy car kills four civilians 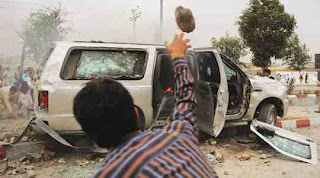 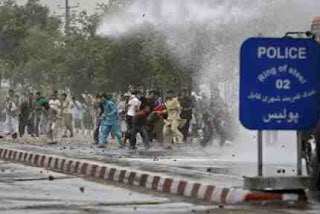 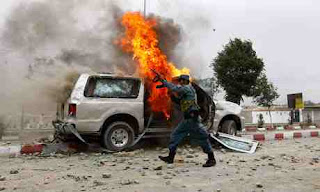 The Afghan capital is on high alert after rioting sparked by the death of four civilians when a US embassy vehicle crashed into their car. There are fears of a repeat of the city-wide riots that struck Kabul in 2006.
Police fired shots into the air in a bid to disperse an angry mob that torched two embassy vehicles and threw stones at police and Nato soldiers who rushed to the scene near the centre of Kabul’s diplomatic quarter.
Sayed Abdul Ghafar Sayedzada, the head of Kabul’s crime investigation department, said six Afghan civilians were involved in the accident and four died. The US embassy said the vehicle had been carrying four US contractors who “co-operated immediately with local Afghan security forces after the incident”.
A western official said two embassy vehicles went to the scene to rescue the contractors but after one of the rescue cars got stuck on a central embankment everyone was forced to get into a single car.
The stranded rescue vehicle and the original car were left at the scene and torched by the rioters.
According to local news agency Pajhwok, despite efforts to cordon off the area an angry crowd of hundreds of civilians soon appeared chanting slogans against foreign troops and Hamid Karzai, the Afghan president.
Witnesses said several Afghan police were wounded after being hit by stones thrown by protesters in an area close to a US military base and a few minutes’ walk from the main gate of the US embassy.
It is one of the most serious outbreaks of public anger in the capital since 2006 when Kabul was struck by hours of rioting after a US military convoy ploughed into a group of pedestrians. Buildings run by foreign aid charities were ransacked and torched during that unrest.
Posted by sysiphus at 11:32