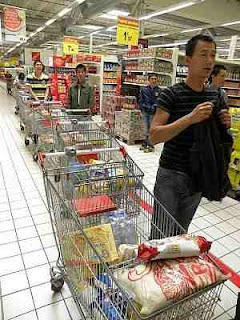 They approached the checkouts with trolleys full of pasta, water and nappies. "Let us go, we must feed our children."
It is the new warehouse workers protest at GS-Carrefour Pieve Emanuele, at the Carrefour supermarket in Assago, near Milan, to protest against non-payment of arrears.
When the manager of the supermarket arrived, negotiations took place to get an advance in the form of basic needs.
Then - after about half an hour inside - they left the trolleys in front of the counter and left the supermarket handing out leaflets.
For three months 60 warehouse workers of Pieve have had their pay packets reduced to zero hours and not been sent back to work. This despite two court decisions that give reason to the labour workers.
Yesterday a meeting between unions in the prefecture, Carrefour and Gemal consortium - which manages the contract - resolved nothing.
Posted by sysiphus at 10:22