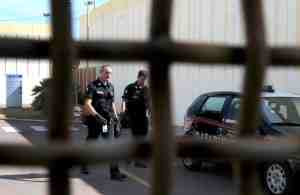 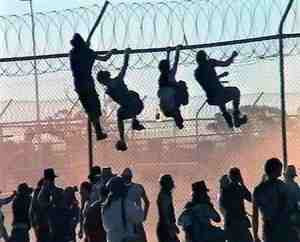 Eighteen arrests, six hospitalied, thirteen wounded. The balance of one night's guerrilla at the Identification and Expulsion Centre in the San Paolo quarter of Bari. Shortly after midnight fifty immigrants climbed on to the roof of the structure and started throwing stones against the police personnel on duty at the centre. A violent uprising organized in every detail: with bars removed from the fences, foreigners ravaged two state police cars, three housing modules and set fire to some mattresses. The guests [read prisoners], mostly North Africans, some with their faces covered, then launched themselves into space beyond the first ring of walls. Six of them were able to climb over the five metre high fence outside into the countryside and have fled the area. Six others fell to the ground resulting in several fractures to the legs and pelvis and were taken to the emergency room of General Hospital and St. Pauls, one of them is hospitalized with serious head injuries, the other five were injured but curable within 5 to 35 days.
In an attempt to quell the revolt eleven of the military regiment of San Marco and two policemen were wounded: minor injuries with prognosis ranging from 3 to 15 days.
Eighteen extra-communitarians, including thirteen Tunisians, four Moroccans and a Palestinian were taken in handcuffs to police headquarters in Bari, where they are under arrest because they are considered responsible for the crimes of destruction, looting followed by fire, resistance, violence and injury to officials.
Posted by sysiphus at 10:32