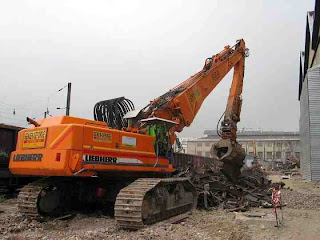 31/08/2010 - Two cashpoints (ATMs) were attacked early today by a dozen bad guys equipped with an excavator from a construction site at Plessis-Robinson (Hauts-de-Seine). The robbers, who managed to escape, have largely destroyed the facade of the bank branch but failed to steal the contents of the two distributors, the sources said. According to preliminary investigation, the criminals had stolen a digger at a construction site near the bank branch, Tuesday around 5:00, before tackling the two distributors.
"They started the engine like that of a stolen car by joining the wires of the starter. And then they went straight to the bank, where they managed to pull out the two distributors," he told a source close to the investigation. Surprised by local residents alerted by the noise, the robbers then fled on scooters and motorcycles, leaving the digger in the middle of the square.
"It was a spectacular attack. One has bomb attacks, but such operations, with construction machinery, it is very rare, especially in Ile-de-France, stressed the source close to the investigation. According to the head of a supermarket located close to the agency, who requested anonymity, the excavator remained on site for a part of the day before being removed. "The machine was completely embedded in the facade, it was amazing..." says a shopper.
Posted by sysiphus at 12:36