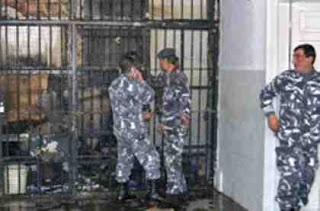 20 September 2010,TRIPOLI — Rioting broke out on Monday at a prison in the northern Lebanese city of Tripoli with inmates taking hostage several warders to demand better conditions and reduced sentences, a security official said.
“The inmates at Qobbeh prison managed to seize five warders and are demanding that conditions inside the prison be improved and that their sentences be reduced,” the official, who requested anonymity, said.
The main road leading to the overcrowded prison inside the city limits was sealed off, according to an AFP reporter at the scene.
Rioting broke out at the same prison in January 2009 with inmates also seizing jailers to demand better conditions.
Qobbeh is the largest prison in northern Lebanon and houses 600 inmates.
Posted by sysiphus at 00:35