LONDON - the passion for freedom knows no borders, the same for solidarity 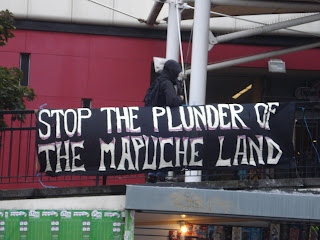 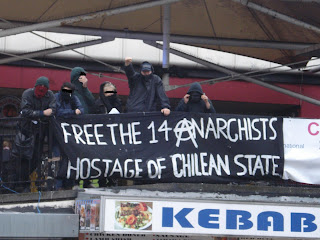 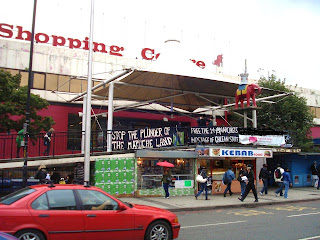 TODAY, Friday 24 September, around 2pm. a number of anarchists and sympathizers from various parts of the metropolis converged on the shopping centre in the middle of the busy intersection Elephant and Castle, chosen because of the thousands of people from Latin American countries living in the area. After dropping banners over the main entrance in solidarity with the Mapuche hunger strikers and the 14 anarchists arrested in Chile, they dispersed into and around the shopping centre and local market giving out hundreds of leaflets in English and Spanish.
Unnoticed by the State and private security who were too intent on defending the bosses' wares, the banners stayed in place for hours in full view of hundreds of bus passengers from almost every country on the planet on their way to and from their places of exploitation.
Today's outing, chosen to coincide with the international solidarity date for our Chilean comrades, rather than being a fait accompli is a call to action everywhere, without delay.
THE PASSION FOR FREEDOM KNOWS NO BORDERS
THE SAME FOR SOLIDARITY
random anarchists in london
Chile: behind the media circus.. On 14th of August, 2010, 14 anarchists were arrested in Santiago de Chile and accused of being involved in a series of bombing campaigns in the country over the past year. Statements have since been released by several groups claiming responsibility for the attacks while the arrestees themselves have denied any responsibility since the very beginning of this charade. The evidence presented against them by the prosecution could not be more ridiculous; from magazines and newspapers to common household items apparently intended for the manufacturing of “explosive devices”, anything is welcome to bolster paranoia. A few months earlier, on July12th, 34 prisoners on remand of the Mapuche indigenous group went (and still remain, after 74 days) on hunger strike in the Chilean prisons of Temuco, Valdivia, Angol and Concepcion. They are demanding the abolition of the Anti-terrorist law as well as an end to the military occupation of their lands located in the South of the country and subjected for years to an ongoing plundering by western corporations. The Mapuche people are characterised by a strong bond with their surrounding natural environment. Their ancestral relation with their land as well as the destruction of the latter by national and international capital’s eternal quest to extract more and more profit from it has motivated the Mapuche to develop an increasingly militant line of action.
While these issues have been subjected to a total information blackout by the mainstream media, both Chilean and international, the mining ‘accident’ that happened on August 6 at the San José copper mine in Copiapo, Chile resulting in 33 miners remaining trapped over 2,300 feet underground, has on the contrary enjoyed a great deal of media attention. Piñera, the recently elected Chilean president, is using the incident to clean the poor image of his government after a series of highly unpopular moves. His sluggish and elitist reaction to what happened following lasts summer’s earthquake along with his extreme conservative policies badly hitting the poorest social classes, had made his level of popularity drop dramatically. Hence the deployment of this “Big Brother” operation aimed at creating a false image of national unity. Nevertheless, little attention has been paid by the mass media to facts such as the workers not receiving their wages, their appalling working conditions and their message of support to the Mapuche cause. Instead, the journalists have focused on unimportant details such as how many bibles the miners got or the number of wives claiming benefits for each one of their trapped husbands.
For the average respectable and law-abiding British citizen, commonly ignorant of facts such as the UK’s involvement as one of the chief arms providers to Pinochet’s dictatorship back in the 80s, this subject might seem to fall into the category “none of my business”. However, silly as it might sound, he or she might be wiping their ass every day with paper manufactured from trees taken straight from the deforestation of Mapuche lands. Every penny we have in our pockets is made from copper, involving us directly in the condition of these miners in Chile and quite sure many other countries. The same goes for the chips in our laptops, our mobile phone... the list could go on for a while. London is a major economic centre, meaning that many triggers are pulled, a lot of blood is spilled so that capital can keep flowing into the city. It is the ‘counterterrorism law’ enacted in 1984 by Pinochet, which still allows Mapuche activists to be charged as ‘terrorist suspects’ and tried in military courts today.Chile passes for a democratic country now. So maybe in your opinion everything is all right and no reasons should be left for protest or radical change. In the same line of thinking, all those Chilean anarchists might actually deserve whatever befalls them. The mistake is to think that any democratic country guarantees freedom, welfare and a fair life for everybody. Look around, look at yourself, can you really see that democratic paradise existing anywhere?
Even the most affluent democratic states like the UK keep their share of homeless, poor and beggars. A life devoted to the pursuit of a professional career soon reveals itself as an unsatisfactory senseless rat race driven by nothing but money and kept going in many cases by tonnes of anti-depressants. More and more families are struggling to make ends meet, while the vast majority of the population are granted the “freedom” of wasting their life tied to the chains of wage slavery. The same old story of exploitation and authoritarian abuse comes to the surface again and we find that under the auspices of our beloved democracy political power is exerted by a bunch of thieves known as professional politicians. They say we have the “power” and the “freedom” to elect them but this is starting to sound for an increasing amount of people like a bloody joke. What this fundamental lie hides is that we remain stripped of any power, whether personal or collective, to make decisions concerning our own lives.
On top of all this the “crisis” comes and as usual it is the poorest, whether the working or unemployed part of the population, who have to pay for the mess. At all times we are reminded how lazy we are and how little we do to increase productivity due to our lack of a “competitive” and market/business-oriented mind. Of course, it is always our fault; we are not perfect slaves yet, we still need a bit of a reminder so it’s time to cut this and that, it’s time to make things more and more difficult. Everything will be all right - unless of course, someone does not swallow these lies and tries to do something about it that does not follow the legally permitted (and therefore useless) ways of protest. Such is the case of the Chilean anarchists. Such is the case of the Mapuche people. Such would our case be if we were to confront the rules of our own democracy. 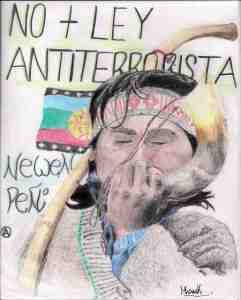 Immediate freedom
to the arrested anarchists!
Stop the plunder of
Mapuche land now!
INTERNATIONAL SOLIDARITY!!
AGAINST THE TERRORISM OF THE STATE AND CAPITAL!
http://paismapuche.org/
http://actforfreedomnow.blogspot.com/
http://culmine.noblogs.org/
London contact: actforfreedomnow@yahoo.com