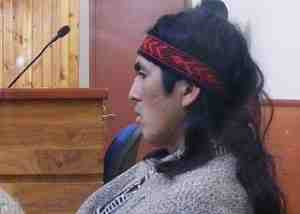 Source: http://paismapuche.org/ - September 21, 2010
About 30 minutes ago due to the severity of their condition Mapuche Political Prisoners 20 year old Víctor Hugo Queipul Millanao and 30 year old Huaikilaf Cadin were urgently transferred from prison in Angol to the hospital in Victoria. The prisoner Huenchullan Felipe, also on hunger strike, has been admitted to the same hospital.
Mapuche communication team.

COMMUNIQUE and PUBLIC DENUNCIATION
Concerning the serious health condition of the Mapuche Political Prisoners in the jail of Angol.

1 .- For the past few days the government of Sebastián Piñera has been playing with the lives of our Mapuche Political Prisoners on hunger strike for 71 days and has deceived the public with a propagandised table of dialogue, which has no intention of responding to demands made by our brothers and supported by all the People of the Mapuche Nation. This is just a strategy for communication to the world to make it seem that the Right in power can control and manage social conflicts in Chile.
2 .- At this moment the Mapuche political prisoners are in very poor health. This racist and discriminatory government does not want to give a real solution to the demands posed by the hunger strikers. In all the prisons the bicentennial of Chile was celebrated with grilled empanadas and cuecas, while the hunger strike of our brothers continues without a glimpse of a solution or any credible and concrete dialogue giving assurance and certainty that the government and politicians will respect their word to listen to the demands of our imprisoned social fighters.
3 .- With these pictures we want to denounce the conditions of our brothers. Despite their delicate state of health, they maintain that the strike will not stop until their demands are taken into account by the Piñera government.
4 .- Our brothers Víctor Hugo Queipul Millanao, a member of our community and Waikilaf Cadin of the community of Juan Paillalef have just been transferred from Angol prison and hospitalized in very serious condition.
We call on all the organizations and the Mapuche communities not to fall for the dirty games and deception of this false dialogue table set up by Sebastián Piñera, and to come to Victoria hospital to try to visit our brothers that have been admitted there.
Comunidad Mapuche Autónoma TEMUCUICUI
WALL Mapuche, Tuesday, September 21, 2010
Posted by sysiphus at 02:57