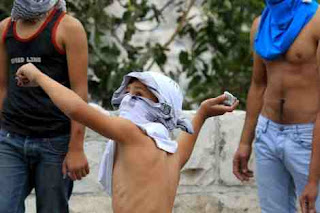 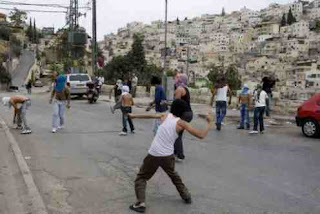 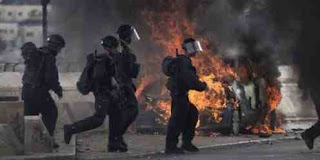 bbc
Violent clashes have erupted in parts of East Jerusalem after a Palestinian man was shot and killed by an Israeli security guard.
After the shooting in the Silwan area, protesters threw stones at Israeli police, who fired back using tear gas.
Hours later, Israeli police briefly entered the area around the al-Aqsa mosque to disperse protesters there.
The status of Jerusalem is one of the most contentious issues between Israel and the Palestinians. Both sides claim the city as their future capital and areas of East Jerusalem, which has been occupied by Israel since 1967, are often the scene of clashes between Israeli security forces and Palestinians.
The trouble started in Silwan in the early hours of the morning, when a man named by Palestinian reports as Sami Sirhan, a 32-year-old father of five, was shot dead by an Israeli security guard. Israeli police said the guard had opened fire when stones were thrown at his car by local youths.
Silwan residents took to the streets after the incident, setting fire to cars and throwing rocks at police and passers-by.
Several people, including an Israeli policeman, were injured.
After the funeral of Mr Sirhan, the trouble spread to the compound of the al-Aqsa Mosque, one of Islam’s holiest sites, as Israeli police pursued the protesters.
Silwan is a frequent flashpoint because of the number of Jewish settlers who have moved into the neighbourhood, our correspondent says.
There are also controversial plans by the city council to develop the area which include proposals to demolish the homes of many local Palestinian families.
The building of Jewish settlements is another thorny issue in the Middle East peace talks, which resumed earlier this month after a lapse of almost two years.
The Palestinians have threatened to walk out of peace talks unless a partial construction freeze, due to expire on 26 September, is extended.
Nearly half a million Jews live in more than 100 settlements built since Israel’s 1967 occupation of the West Bank and East Jerusalem.
They are held to be illegal under international law, although Israel disputes this.
On Tuesday, the international Quartet of Middle East peace mediators urged Israel to extend its partial freeze on Jewish settlements in the West Bank.
Posted by sysiphus at 14:10