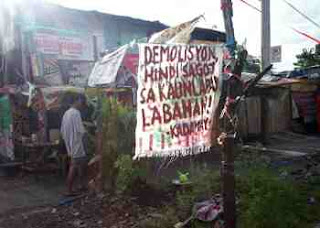 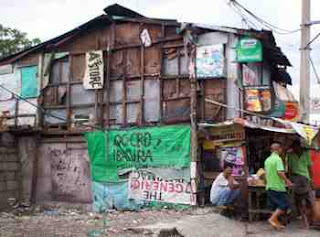 23 09 2010 - MANILA — Thousands of squatters resisting eviction from a roadside shantytown won a temporary reprieve on Thursday after fighting with police and shutting the Philippine capital’s main highway, police and officials said.
Several officers were slightly injured as slum dwellers fought running battles, while traffic on the Epifanio de los Santos Avenue was backed up for several kilometres (miles) after the road was blocked, officials said.
The protest prompted a court order temporarily halting the demolition of the estimated 6,000 shanties at the 340 hectare (840 acre) site, according to Chito Cruz, general manager of the government’s National Housing Authority.
One section of the six-lane highway that bisects Manila was strewn with wooden barricades and rocks by early afternoon, five hours after the standoff began, with daytime traffic diverted to smaller, more crowded streets.
« There was some rock-throwing and scuffles. Some of my men were slightly injured, » senior superintendent Benjamin Magalong, head of the 300-member riot police deployed in the area told AFP.
A quarter of a million vehicles use the artery on a typical workday, according to government estimates.
Magalong said slum dwellers were resisting an initial court order to remove the settlement, called North Triangle.
The government wants to redevelop the site into a business district in a joint venture with a private firm.
Cruz, whose agency owns the occupied property said he was surprised by the violence of the squatters who resorted to blocking the highway and throwing stones at the police.
Police were pegged back by a hail of missiles as they attempted to charge the protesters, while water cannon blasts also failed to disperse the crowds, according to AFP photographers at the scene.
Shantytown residents stood with arms linked across the road, with their belongings stacked in the middle of the highway behind them.
By midday the largely unprotected demolition crews had been forced to stop their work in the shantytown after having torn down around 50 dwellings, an AFP photographer on the scene said.
Cruz said in a television interview there were about 6,000 families at the site and over 3,000 families had already been relocated.
He said that he was confident the court order stopping the demolition would soon be lifted.
The World Bank estimates up to half of Manila residents live in slums.
Posted by sysiphus at 18:08