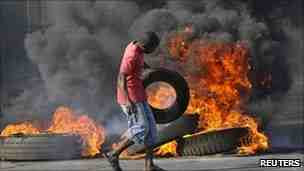 At least two people have been killed in riots in Mozambique's capital Maputo over rising food and fuel prices.
Unconfirmed reports say police opened fire on thousands of demonstrators and that at least one of the victims was a child. Injuries were also reported.
The protesters - mostly young men - threw stones at the police and blocked roads with burning tyres.
The authorities in the impoverished African nation had earlier warned the protests would not be tolerated.
The protests are against recent rises in the cost of essential foods, fuel and cement.
Shops have closed and public transport has come to a halt following Wednesday's clashes.
"I can hardly feed myself... I'm outraged by this high cost of living," Maputo resident Nelfa Temoteo told Reuters news agency.
Mozambicans have seen the price of a loaf of bread rise by as much as 25% as the value of the national currency, the metical, has fallen against the South African rand. Fuel and water prices have also risen.
In 2008, clashes between police and rioters over rising prices left at least four people dead and more than 100 injured.
The riots then forced the government to cancel plans to raise fuel prices.
(source: BBC news online)
PS: so far, 6 people died from the bullets of the police and many more have been wounded. Today (1st September) was the day when the prices of basic food ( water, bread, cooking oil, rice) were supposed to go up once again. There are burning barricades throughout the city, looting and clashes with the police. "The leaders are rich and well fed, why are we left to starve to death?", shouts a girl.
On tv they say there are revolts only in Maputo, being that Cidade da Beira and other large cities are going through their normal routines.
It is said the protests were called for through anonymous text messages, and they have "no face" (i.e., no leaders, no representatives).
(source: RTP tv company).
Posted by sysiphus at 13:57