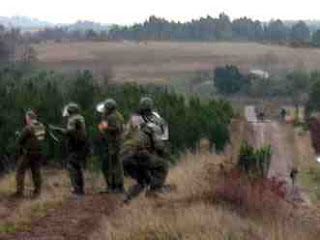 canaldenoticias
Ercilla Saturday, September 18, 2010 13:47 * About 20 individualss, identified by police as Mapuche, opened fire with shotguns and pistols at security guards of the Special Forces personnel on the land La Romana. * Police vehicle was hit by bullets in its front windshield, no injuries recorded.
A new incident occurred late on Friday in the so-called Mapuche conflict zone, near Ercilla, after a group of hooded people armed with shotguns and pistols fired at police during a confrontation.
As reported by the uniformed guards, about 20 Mapuche masked with scarves and ski masks and heavily armed, entered the fundo La Romana, belonging to the farmer René Urban.
The violentistas opened fire on a sentry box used by Special Forces personnel Carabineros, located within the property and also against a bus of the same institution. After nearly three hours of skirmishes, the antisocial group, which police identified as potentially members of the indigenous community of Temucuicui, though adding that there was no absolute certainty, retreated to the Alaska farm sector, adjacent to La Romana.
No people were reported arrested or injured in these violent events, but the B-268 police bus was shot in its front windshield.
Posted by sysiphus at 13:59