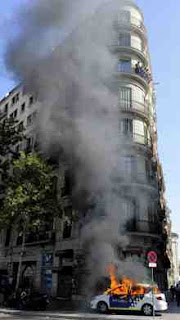 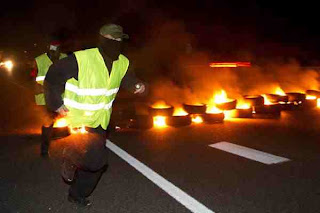 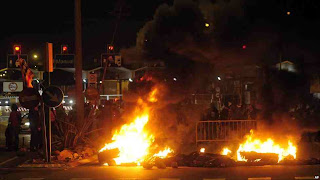 Almeria
signalfire
In the east of Almeria Province – the Mojacar area – the morning of the national strike appears to have started without reported incidents. Pickets have not yet been spotted in the area and for all intense and purposes it is business as usual. Schools, banks. Petrol stations and supermarkets contacted were all open.
Meanwhile this morning, unions declared the 24-hour general strike in Almeria City as a resounding success. They claim 90% of businesses were shut, although in the early hours of the morning this was probably true.
At the strike of midnight 100 picketers barricaded the exit gates of the Almeria bus station to stop buses leaving. Ten minutes later 50 riot police dispersed the crowd and with some remaining at the station on guard.
At 6am a picket of about 40 people closed access to Almeria Port, although from 9am it reopened and is now reported as operating with about 30% of the workforce having joined the strike.
Municipal rubbish collection did not take place.
Almeria fire services have attended a dozen incidents of burning rubbish containers and tyres across the city.
Pickets also stopped access to several retail parks and industrial estates although this was before most of the businesses were due to open.
Nationally, the government assures minimum public transport services are in operation. Electricity consumption in Spain this morning dropped by 19% compared to the normal amount, attributed to the strike.
Clashes with police have been reported in Barcelona, Alicante and Vigo.+
Unions say construction and metal industries have seen a 100% participation with the strike.
Posted by sysiphus at 16:36