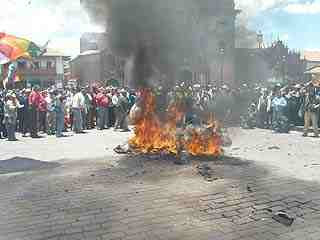 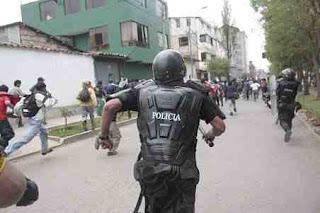 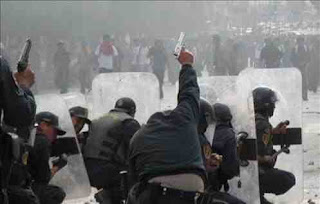 newstribune
CUZCO, Peru Â– Peruvian police say hundreds of student protesters toppled a perimeter wall at Cuzco's airport, prompting flight suspensions and cancellations that stranded about 500 tourists.
Other protesters overturned a municipal vehicle.
Cuzco is the gateway to Inca highlands citadel of Machu Picchu. About 1,500 tourists visit the ruins daily.
Police firing tear gas eventually turned back the airport protesters on Friday.
They are backing peasants who have been blocking roads in the region for nearly two weeks, protesting government plans to build a reservoir in the municipality of Espinar. The peasants fear it will take away their source of water.
Officials say the train to Machu Picchu resumed service after a two-day shutdown due to the protests.
Posted by sysiphus at 16:32