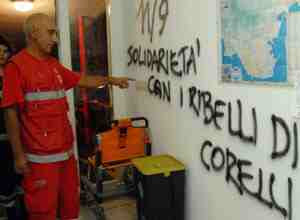 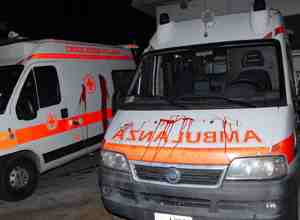 The headquarters of the Red Cross in Piombino were raided, parked ambulances smeared with red paint, the walls written on with spray paint, including the phrase '11 / 9 Solidarity with the rebels of Corelli'; 'Red Cross murderers'. The news was published today by some local newspapers.
The raid, by about fifteen young people, faces uncovered, took place yesterday around 8pm. The reason for the action of the young group, as reported in writings on the walls, would be an incident last Saturday in a centre of identification and deportation in Via Corelli in Milan, managed by the Red Cross. Five non-EU immigrants held in the centre were arrested by police after a riot. The clashes had occurred after a few days earlier a boy had broken a leg and, according to other inmates of the centre, was beaten by police. At the moment of the break-in at the headquarters of the Red Cross, which police are investigating, a doctor and three volunteers were present.
The action of young people, unarmed and all with their faces uncovered, lasted only a few minutes and ended before the arrival of police and Digos[political police]. The fact that the protagonists of the blitz had their faces uncovered suggests that might not be from the area. Police are investigating a gathering of some politicized groups in Riotorto , which ended just yesterday afternoon.
Posted by sysiphus at 16:14