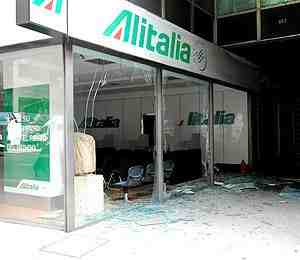 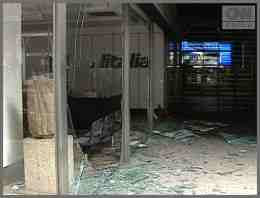 signalfire
BUENOS AIRES – A bomb went off early Thursday at a shopping mall in this capital, causing extensive damage to American Airlines and Alitalia ticket offices, Argentine police said.
Leaflets found at the scene bore the name of a Chilean anarchist group and included demands for the release of “political prisoners” and autonomy for the Mapuches, an indigenous people concentrated in Chile with some communities in Argentina.
While witnesses reported seeing a hooded man near the site of the blast, police are reviewing the tapes from security cameras.
Chilean anarchists have claimed responsibility for a series of recent bombings in Buenos Aires and Argentine investigators are consulting with their counterparts in Chile, police said.
The attack on the mall came a day after the Argentine Supreme Court approved the extradition to Chile of Galvarino Apablaza Guerra, former leader of a guerrilla group that killed right-wing Chilean Sen. Jaime Guzman in 1991.
Argentine President Cristina Fernandez could block the extradition if she decides to grant Apablaza asylum as a political refugee.
The “political prisoners” mentioned in the leaflets are likely the 15 Chilean anarchists accused of carrying out 23 bombings in Santiago and other cities.
Those attacks targeted banks, offices of foreign companies, embassies, churches and police stations, mainly in the capital. The sole fatality was an anarchist killed when a bomb exploded as he was transporting it on a bicycle. EFE
Posted by sysiphus at 10:34