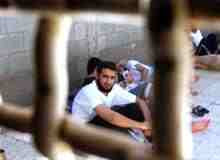 Ahlul Bayt News Agency ; RAMALLAH -- Palestinian prisoners in all Israeli jails have announced they will go on hunger strike next Saturday Sept. 25 in protest of the heightened abuse they have recently suffered from the Israeli prisons authority (IPA).
“The IPA has launched an unprecedented campaign against prisoners since the direct negotiations started, which reflected the Israeli government’s lack of integrity in developing the so-called ‘just peace’ with the Palestinian people,” the prisoners said in a statement.
The brutal assault against the Ofer prisoners, usage of excessive force, and fierce means of repression, including dogs, batons, and tear gas without reasonable cause indicate that there is a plan targeting prisoners’ rights, the prisoners added.
They underscored in the statement that the IPA uses special forces to carry out provocative search campaigns, which include strip searches and other forms of humiliation, and transfers prisoners from one prison to another while holding other prisoners in solitary confinement.
The IPA has denied prisoners the right to visits, imposed fines on them, banned books and newspapers, and prohibited prisoners from purchasing needed foods during the Muslim holy month of Ramadan and Eid al-Fitr holiday.
Prisoners believe the IPA has kicked off an “open war” against their lives and rights without anyone to fight in their corner.
Gaza’s prisoner committee asked the international community to issue international resolutions to protect Palestinian prisoners in Israeli jails.
The IPA has a long time back set off an open war against prisoners using racist measures that are tantamount to war crimes that should be prosecuted in international courts, the committee’s media official Nashaat al-Wahidi said Saturday.
The transfer of sick prisoners from hospitals to prisons was an indication that Israel had begun an open war against prisoners as what happened recently in the Nafha, Ofer, and Hadarim prisons, Wahidi stated.
Posted by sysiphus at 02:12